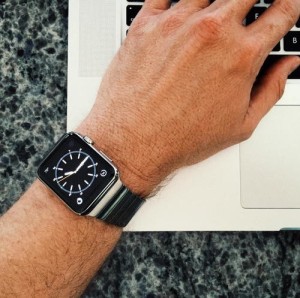 I’ve had my stainless steel Apple Watch with its link bracelet going on ten days. More than long enough to form an initial impression of the thing.

In summary, I have yet to have a “Oh, that’s why I bought this thing!” moment. Someone on Twitter suggested to me that the watch was a beta product. I don’t think that’s right. It’s supremely well finished, both physically and from a software perspective. But it’s limited. It feels more useful than the first gen iPhone, but the first iPhone was significantly more revolutionary and felt as much every time you used it. So it’s clearly a 1.0 product but in a world with greatly increased expectations.

The activity features are pretty great, but only the Sport model is reasonably priced if that’s how you’ll primarily be using it. I find that it’s basically a “push” device for me in that it’s there to allow me to see notifications without taking my phone out of my pocket or flipping it over. But then, usually, there’s little I can do with the notifications without using the phone. You can use the watch to make short, canned replies to messages, but typically if I’m in a spot where I don’t want to use my phone, I’m certainly not in a place to use speech-to-text. So out comes the phone anyway.

I think, in time, Apple Watch will be amazing. There’s all kinds of things I can imagine that a device that knows you, specifically, are using it could come in handy. It could replace website passwords, it could open your house, start your car. But right now, it’s early days and very limited. I am not sorry I got it, though. Even with all its shortcomings, I find that I want it on my wrist more than any other of my watches. I hope that Apple moves quickly to make this a more fully-formed product and doesn’t let fashion or an overdeveloped concern for a specific style to get in the way of enhancing its appeal and functionality.